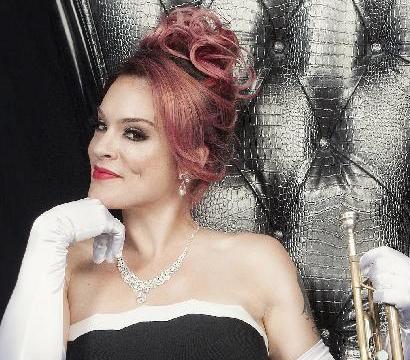 Adelaide is a native Texas artist who sings and plays trumpet and is now based out of Los Angeles, California with several working bands and projects. With a bacherlor's degree in Jazz Studies and master's degree in Afro-Latin music and versitile performing experience she has created different succesful formats of the Adelaide band that have led her to perform in a variety of venues ranging from Disneyland and Knotts Berry Farm, popular music festivals, grand casinos, and even the Staples Center. She was also a former contestant on La Voz Mexico 2018 and in 2019 released her 2nd and all original album "Reflexiones De Mi Mente", which can be found on all major streaming applications.

The original version of the Adelaide band started in 2013 as top40, old school funk, and Latin top40 cover band and still plays all over Southern California at popular venues, festivals, casinos, and private events. In 2014, Adelaide was approached by Disneyland Resort and Entertainment to create a Latin top40 show. The band had immediate success and performs at the resort multiple times a month and has also branched outside of the park performing all over the state of California. Due to the success of the band inside the park, in 2016 Disney asked Adelaide to create another Latin show that embodied the sounds of the Latin Caribbean and New York salsa scene which then resulted in Adelaide Tropical. Again there was immediate success and now Adelaide Tropical is also the official salsa band at Disneyland. In 2019 Adelaide debuted a third project for the Disneyland Resort called Bacano Boombox. This band covers popular and current American top40 songs but with a Latin band format and rhythms and again has become another park favorite.

Tribute shows are also a part of Adelaide's repertoire. She originally started with a Selena tribute show which is still very popular, but has now created an even larger show entitled: Latin Ladies Live. In this tribute she dresses and performs as Jennifer Lopez, Shakira, Gloria Estefan, Celia Cruz, and Selena. This show's popularity and demand has grown very quickly throughout the western side of country.

In 2014 Adelaide released an album entitled Como Sera , which was a mix of arrangements of popular cumbia and rock en español songs along with a few original tracks as well.

The biggest project on Adelaide's agenda is the recent release of her new album "Reflexiones de Mi Mente". This album is a mix all all origianl Latin Urban songs and can be found on all major streaming applicaitons.

The new Adelaide album Reflexiones de mi Mente will be available to stream and hard copy on may31st!!!

Adelaide has been chosen to be on La Voz Mexico and has made it onto Natalia Jimenez' team!!! stay tuned on Televisa's canal de las estrellas

Adelaide Tropical will be a part of Disney's Food and Wine Festival March 1st-April 11th.

Every Tuesday and Thursday on the Paradise Garden Band stand and 4 special performances as a 9 piece band on the Palisades stage March 3,9,31st, and April 11th!

TUESDAY MARCH 7TH the video for our original song "Only" will be viewable and uploaded to all your favorite music sites such as pandora, spotify, itunes, etc. You can download the song FOR FREE here at our website!

downstairs inside the Comedy Club, no cover! mix of English top40 and latin

downstairs inside comedy club. No cover. Mix of Englsih top40 and latin

along with DJ Cain and $2 modelos all night!

ESPN Stage. Free to the public

ESPN stage. Free to the public

Covina, 9-1am. ANd they will be showing the UFC fight that night!

9-1am. guestiist available. mix of latin and top40

along with DJ cain and $2 modelos all night

along with Dj Cain and $2 modelos all night long

Latin All Stars at Steven's Steakhouse

special appearence with the Mariachi Divas

Victoria Park on the City of Carson

Opening for Trenere at the Bicycle Casino Commerce

Guest singer for LA Salsa Divas at the Granada